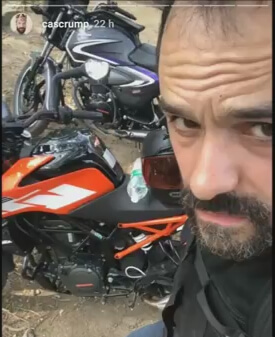 Casper Crump is working in a vlog about places of  India. The videos are all created and edited by him and he will use his motorcycle to reach different places in India. 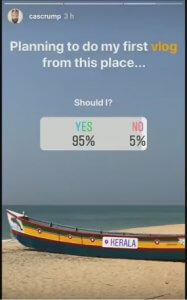 Casper Crump showed us how he was preparing his KTM Duke for it. He changed the wheels and added some cameras in it. He also put a camera in his helmet and he’s very excited and happy with this new project.

His first video of his vlog, was recorded in the month of December last month in Kerala. He opened a vote to see if we wanted to see in that beautiful place his first chapter of what will undoubtedly be a great adventure.

The truth is that I think your vlog is a great idea and a great initiative. And I started to follow Casper Crump through Istagram shortly before he moved with his family to live in New Delhi. Since then, Casper Crump has shown much of that country. Enough to arouse my curiosity and look for some alternative information to what Casper shows us in his usual photos or videos.

It does not have a specific launch date, nor has it announced any platform from which its vlog will be seen, but I at least wait for it with impatience.

Working in a Vlog Videos:

From here I would like to wish to Casper Crump all the best with this project, which I will not miss, although I still do not know enough English to understand everything that is said in it.