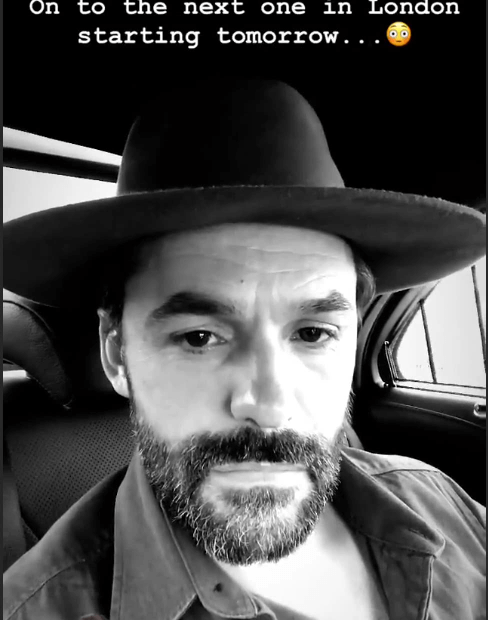 Casper Crump left Gran Canaria and traveled to London. After completing the filming of a Danish series on the Spanish island, he’s now in London. There he has embarked on his new project: Richard III.

Richard III is a historical play by William Shakespeare believed to have been written around 1593. It depicts the Machiavellian rise to power and subsequent short reign of King Richard III of England. Casper Crump will represent Richard III himself in the play.

In the publicity images of the play, you see a modern Richard III. But in the trailer of it, we also find a real villain hidden behind the title of King.

But that did not prevent the Danish actor enjoying a few days on a motorcycle on the roads of the Spanish island.

Before traveling to London, Casper Crump rented a KTM and enjoyed the curves and landscapes of Gran Canaria, leaving us some instantaneous snapshots of his route. For his gestures of victory (peace as he indicated) in the photos, he met Spanish bikers who did not hesitate to greet him even without knowing him. And I must say with pride that this huge community, is the most supportive and friendly I know. And in which I include myself when I go with my motorcycle on the road.

But the origin of our current biker salute, it seems that it was the traditional greeting among the motorcycle couriers of the army of Great Britain to cross between the dangers that lurked in their liaison missions in a devastated London. That is one of the several theories that exist and the one that I personally stay.

Luckily, the “V” biker is now a sign of companionship and cordiality, and a greeting that goes far beyond the impersonal bursts of long light. We do it among those who share passion and road, and of course, it comes from the will of the bikers to give us encouragement and accompany us in our travels.

But this is already past water. He is currently in London. He is studying the script of the play he will perform this summer at Kronborg Castle. From August 1 to 23 Ticket sales here.