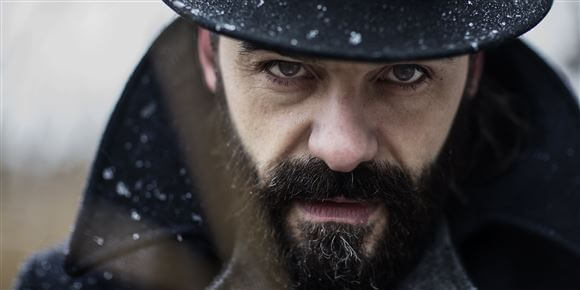 I still remember when Jim Carrey starred in “The Mask”. Some commented how expressive the actor’s face was and how they adapted the mask to his face. Well, Casper Crump isn’t far behind. He’s a man with a thousand faces.

If you are reading this, it’s that you do not doubt that he’s a great actor. But if you’re here for another reason and you don’t know what I’m talking about, take a seat because this is my opinion of him as an actor. And I think that a man like him should have more recognition than he currently has.

We’ll start with how he is. A man who is not afraid of ridicule, dares everything, has a great sense of humor and most importantly: enjoys his work. I think that makes him the ideal companion for everyone, from hairdressing to the delivery of the project wherever he is. It lends itself to doing the action scenes, rehearsing until memorizing the fight scenes. Thus giving a sense of real combat that not all actors know how to transmit.

The international career of a man with a thousand faces.

But let’s talk first of who you probably know: Vandal Savage. It was the role that gave him international fame, although who pushed him to it, was the deserved Oscar for the short film “Helium“. There he plays Enzo, a janitor who establishes a friendship with a terminally ill child and tells him about a wonderful world called Helium.

But let’s go back to Savage. I loved Arrow, but I fell in love with The Flash. It was there when I started asking myself about him. Who was that I liked so much in such a short time. I’ve always liked bad guys or tough guys in movies or series.

My lifelong favorites have always been Michael Ironside (from Ham Tyler on “V“) and Jack Nicholson (from ” The Witches of Eastwick “). And I see Casper in the same line of both. He also played a villain role in “The Legend of Tarzan.”

His roles in Denmark.

But his career is not limited to those two roles or to being a villain only. He has also played humorous roles, such as Fonseca in the Danish series called “Kristian“. A rather peculiar mobster that, for example, differs very well from Vandal Savage. And I do not just mean clothing or characterization, no. I speak of the gestures of the actor himself, who has been able to give different personalities in that sense to the characters. Something that for example didn’t happen to George Clooney, who was always himself in its infancy. But of course, his look and that half smile made us all crazy and we forgave him. I the first one.

In comedy he can also be seen in “Talenttyven“, Danish film by Jonatan Spangs. Unfortunately, both the series and the film are only in Danish. I have seen them whole and the truth is that I laughed a lot with them even without understanding anything of the language. By the way, in “Talenttyven” Casper sings and dances. And he does it really well, he has a very good voice and I carry the three songs of the film on his mobile. Live “The Heartbreakers Hotel”!

Let’s continue advancing in their works, where I want to emphasize that this actor, this man with a thousand faces. This man who is not afraid of anything, also steps on what I consider the most difficult in his profession: The Theaters. There it isn’t worth repeating shots or letting your day to day affect you in the middle of the performance.

He has worked in plays like “Venus in Fur“, making a director seduced by the actress of his cast. He has played the bitter Mr. Scrooge, in “A Christmas Carol. In Prose. Being a Ghost Story of Christmas“. Or transvestite in “Singapure” of 2011. The next month of August can be seen in Richard III. You can read more in the Casper Crump blog .

So, we have a great actor before us, with a lot of experience and who dares with everything. Above, he has a good presence and talent, to embroider any paper that is put before him. Can one ask for more?

Yes, more international work, to be able to follow him from Spain.
More images about his a thousand faces here.