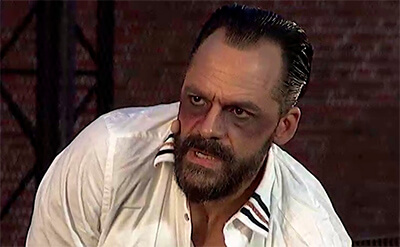 Well, talking about the theater play Richard III comes a few months late. Specifically about 10 months late, taking into account that the work was carried out in August 2019. For my part, I very much regret not being very active with the web. I will not count my sorrows. But my head isn’t in his place and I find it hard to focus.

But I remember that month perfectly because I wanted to go see the theater play in Denmark. I looked at flights, prices, what it would cost me to be there one day. All this knowing that I don’t know English and even less the Shakespearean English that they were going to use in said work. In short: I was not going to understand anything.

But just thinking about having Casper Crump a few meters in front of me, it was worth it. The bad thing is that when I had money, because for years I was a slave to poorly paid overtime, I didn’t have time. And now that I have time, what I don’t have is money. Less for an expense like that.

So considering that I wanted to go and couldn’t and my insane state of mind, it wasn’t a very good month of August for me. On the other hand, for Casper, the theater play, his castmates and other workers in it, was a complete success. I remember spending all that month looking for everything I could find about the work, videos, photos, articles. All in Danish, I don’t speak English, even less Danish, so it was difficult.

I was very happy to see the great reviews while I was saddened not to be able to go see the work of Richard III. And incidentally take him and try to give him the drawing for which I earned his follow on Instagram. And as I write these lines, I remember everything with nostalgia.

Fortunately, I managed to get a digital copy of the theater play, which I have tried to see several times and my head has not left me. And today, finally, June 11, just one month after Casper Crump’s birthday, I managed to focus and see her whole. And the first thing I thought was how sad it was that I couldn’t go see her live.

Seeing him move freely around the stage has been somewhat gratifying. As he looked at the public without fear, with security and knowing exactly where to place himself, what to say. Let’s see, let’s be fair. I understood: “farewell”, “king”, “queen”, “princesss”, “brother”, “mother”, “citizens”, “God Save the King”, “A horse. A horse. My kingdom for a horse “and I think already. Maybe when I see it several more times and listen to it I will learn more things, but that did not prevent me from seeing the entire play Richard III. And even less that he enjoyed it.

What to say about him other than that he was fantastic? Well, if I had been there I would have died of nerves. It was seeing him at home and just thinking about it made me nervous. That in one of the scenes, if he reads this, he will know which one, I would have turned red as a tomato. And if I came to coincide just on the side where it mixes with the public, I think I would have died of the jerk. Either that or I would have kidnapped him directly ;).

The truth is that this was to talk about Richard III and in the end I am talking more about myself, but also about the impressions that I have taken with the play, like its actresses. I loved the silent woman and Queen Margarita liked how she played her role.

The truth is that it is admirable that not only those actors studied that script, a huge script, in Shakespearean English, in a language that is not their own. Recall that the actors were Danish and for that alone, for almost two hours on stage, where there was only silence when the silent “spoke” the others had their phrases and not exactly simple.

The completely minimalist setting pleasantly surprised me with its great use. Having Kronborg Castle behind him did a lot in terms of setting. The staging and costumes of the actors were not exactly those that corresponded to the life of Richard III and that highlighted it all the more.

For me, it will be a work that I will see again, although it pains me that I couldn’t be there. I recommend seeing it if you can.

To finish, I leave you a link to the work images here.
And link to the promotional video on youtube here.